Rabbi Shmuly and Freidy Hecht provide material and spiritual sustenance to all Jews in need.

Brought to you courtesy of Chabad.org

Nestled among breathtaking scenery along the west coast of Canada, the picturesque town of Hope, British Columbia, was hammered with record rainfall earlier this month, flooding the entire town and overwhelming its wastewater system. To make matters worse, all roads linking the town to the rest of the country have been rendered impassable by the floods, effectively cutting the citizens off from the rest of the world.

And it’s not just Hope. The entire Fraser Valley—stretching all the way down to Washington State in the United States—has been devastated with more than 10,000 people forced to evacuate their homes with no end in sight.

But there’s hope in Hope, and it’s coming in part from an unexpected place—the Jewish community of nearby Kelowna, headed by Rabbi Shmuly and Fraidy Hecht, who co-direct the Okanagan Chabad House.

“I’ve known the rabbi for some time now, regularly interacting with him and showing support for his activities,” said Christel Dahlberg, a Kelowna native who works in discharge planning at the local hospital. Though not Jewish herself, she got to know Hecht after showing up for a solidarity night in the wake of a tragic shooting five years back.

“Rabbi Hecht sent me an email right away, and suggested we meet and figure out ways we can help people,” she tells Chabad.org. “We had a meeting with a number of other concerned community members last week, and we came up with several strategies as to how we can be part of the solution. People are really stranded and down on their luck, so anything we can do is a real help.”

One of the principal activities Hecht, Dahlberg and others on this ad-hoc committee are doing is what they call “Hug Bags.” Drawing resources from local community members who were touched by their efforts, the bags contain basic commodities and food. Bags are distributed to anyone who reaches out or is otherwise connected through the deep community network.

At times, it takes creativity to think of who would need such aid, and how to get to them. “I know the director of spiritual care at the hospital where I work,” said Dahlberg, “so I’m planning on giving him some of the Hug Bags to distribute to any patients, as well as letting him know that anyone can reach out to the rabbi for help.”

While health authorities are tending to more basic needs, this grassroots committee is tending to people’s emotional, mental and spiritual needs. It’s from the people to the people. “My dear friend Ezra Cipes, C.E.O from Summerhill Pyramid Winery, ‘Canada’s most visited winery,’ volunteered to donate some of their wine for the packages,” said Hecht. “It brings so much joy to people when they receive this random gift.”

Matan Volach, owner of a specialty chocolate company, also got in on the effort and threw his chocolatey weight behind it. Graciously offering confectionery goodness, the Hug Bags are designed to bring warmth, love and kindness during a cold, dark and awful storm.

Activities aren’t limited to distributing hug bags. “Whatever someone needs, we’re doing our best to be there for them and help out,” said Hecht. In one case, a large old tree fell on someone’s roof, causing significant damage. Thank G‑d, no one was inside, avoiding any casualties, but the tree needed to be removed and basic repairs made.

Who else but the rabbi and his team to come to the rescue?

“One person’s fence was blown over, another lost electricity for a full day, and another one’s son lost their entire farm. And if we wouldn’t call, these thoughtful souls wouldn’t reach out on their own, as they don’t want to bother anyone. But they really need our support and when it comes, they couldn’t be more grateful.” 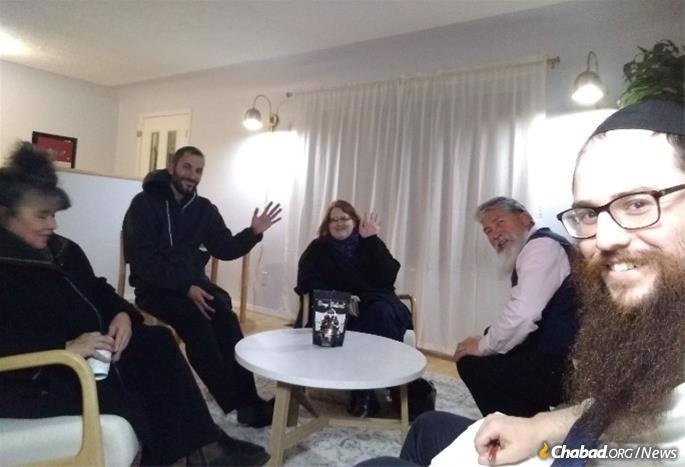 Hecht meets with a local family.

In addition to practical aid such as bags and tree-lifting, Hecht and his team also offer emotional and spiritual support. “Someone called me very distraught the other day, and after spending almost an hour on the phone with them, it was gratifying to hear them say, ‘You know, rabbi, people have it much worse off than me; I should really be thankful. It could have been much worse.’”

“I love what Rabbi Hecht does,” said Sam Wislesky, a local community member who has volunteered to join the effort—and also did some heavy lifting with that tree. “It’s a very special level of help we’re orchestrating here, as much of it is anonymous. I get the Hug Bag, an address and oftentimes, I don’t even see the person when I deliver it. I just know that their faces will light up with joy, and that makes me feel really good inside.”

Wisleski recalls some time back when he was personally down on his luck, and the rabbi helped him get back on his feet. “Helping others and doing a mitzvah feels like food for my soul. I’m not very religious myself, but I feel very connected to Yiddishkeit, and getting involved in the drive to aid others is a natural fit for me.”

What One Person Can Do 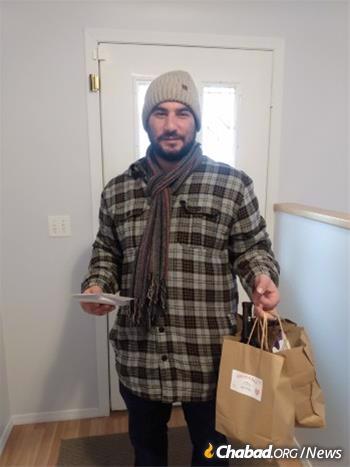 Jewish volunteers are key to the effort

Hecht speaks of his internal process in mobilizing such a force with such speed. “Many people think that in the face of such colossal tragedy, what can I really do? There are 10,000 people in need; who can even wrap their mind around such a number?

“It really can be overwhelming to the point of paralysis, but that’s not how we think. The Rebbe taught us that in times of mass distress, each individual must think of what it is they can do and who they can help, and start there. I may not be able to help 10,000 people, but I can probably help 10. And I take it from there. If I can save even one person or help them in any way, I have impacted an entire world.”

While the aid offered may not be literally life-saving, as such services are largely being handled by government officials, Hecht stresses that his services are indeed critical. “The general public is becoming increasingly aware of just how critical mental health is to a person’s overall well-being. You can provide someone with a warm blanket and a place to sleep for a few days, but if they’re dying inside with anguish, there’s no personhood to benefit from the services.

“Included in mental health is emotional health, and, of course, spirituality. The benefits of spiritual guidance are well-documented by now, and as we run around providing that very service, we’re literally reviving people.”