As we celebrate Chanukah, here are a number of different resources from Rabbi Sacks zt"l about the Festival of Light! Hannukah sameach!

'THE LIGHT OF JUDAISM' 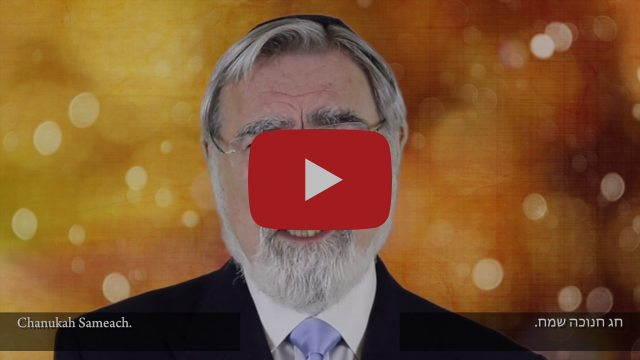 Watch a video on Chanukah, recorded by Rabbi Sacks for Chanukah 5779, called 'The Light of Judaism'.

Download 'Ceremony & Celebration' on Chanukah, for an educational resource designed for the whole family that includes a short thought on Chanukah from the writings of Rabbi Sacks zt”l for each night of Chanukah, as well as questions for discussion, stories, and Chanukah themed-games for children.

'THE FESTIVAL OF LIGHTS THAT SIGNIFIES AN INEXTINGUISHABLE FAITH'
(First published in The Times, December 2012) What I find fascinating about Chanukah, the Jewish festival of lights we celebrate at this time of the year, is the way its story was transformed by time.

It began as the simple story of a military victory, the success of Judah the Maccabee and his followers as they fought for religious freedom against the repressive rule of the Syrian-Greek emperor Antiochus IV. Antiochus, who modestly called himself Epiphanes, “God made manifest”, had resolved forcibly to hellenise the Jews.

He had a statue of Zeus erected in the precincts of the temple in Jerusalem, ordered sacrifices to be made to pagan gods, and banned Jewish rites on pain of death. The Maccabees fought back and within three years had reconquered Jerusalem and rededicated the Temple. That is how the story is told in the first and second books of Maccabees.

However, things did not go smoothly thereafter. The new Jewish monarchy known as the Hasmonean kings themselves became hellenised. They also incurred the wrath of the people by breaking one of the principles of Judaism: the separation between religion and political power. They became not just kings but also high priests, something earlier monarchs had never done.

Even militarily, the victory over the Greeks proved to be only a temporary respite. Within a century Pompey invaded Jerusalem and Israel came under Roman rule. Then came the disastrous rebellion against Rome (66-73), as a result of which Israel was defeated and the Temple destroyed. The work of the Maccabees now lay in ruins.

Some rabbis at the time believed that the festival of Chanukah should be abolished. Why celebrate a freedom that had been lost? Others disagreed, and their view prevailed. Freedom may have been lost but not hope.

That was when another story came to the fore, about how the Maccabees, in purifying the Temple, found a single cruse of oil, its seal still intact, from which they relit the Menorah, the great candelabrum in the Temple. Miraculously the light lasted eight days and that became the central narrative of Chanukah. It became a festival of light within the Jewish home symbolising a faith that could not be extinguished. Its message was captured in a phrase from the prophet Zekhariah: “Not by might nor by power but by My spirit, says the Lord Almighty.”

I have often wondered whether that is not the human story, not just the Jewish one. We celebrate military victories. We tell stories about the heroes of the past. We commemorate those who gave their lives in defence of freedom. That is as it should be. Yet the real victories that determine the fate of nations are not so much military as cultural, moral and spiritual.

In Rome the Arch of Titus was erected by Titus’s brother Domitian to commemorate the victorious Roman siege of Jerusalem in the year 70. It shows Roman soldiers carrying away the spoils of war, most famously the seven-branched Menorah. Rome won that military conflict. Yet its civilisation declined and fell, while Jews and Judaism survived.

They did so not least because of Chanukah itself. That simple act of families coming together to light the lights, tell the story and sing the songs, proved more powerful than armies and longer-lived than empires. What endured was not the historical narrative as told in the books of Maccabees but the simpler, stronger story that spoke of a single cruse of oil that survived the wreckage and desecration, and the light it shed that kept on burning.

Something in the human spirit survives even the worst of tragedies, allowing us to rebuild shattered lives, broken institutions and injured nations. That to me is the Jewish story. Jews survived all the defeats, expulsions, persecutions and pogroms, even the Holocaust itself, because they never gave up the faith that one day they would be free to live as Jews without fear. Whenever I visit a Jewish school today I see on the smiling faces of the children the ever-renewed power of that faith whose symbol is Chanukah and its light of inextinguishable hope.