My Teacher: In Memoriam

Judaism made an extraordinarily wise decision when it made teachers its heroes and lifelong education its passion..

There are moments when Divine Providence touches you on the shoulder and makes you see a certain truth with blazing clarity. Let me share with you such a moment that happened to me this morning.

For technical reasons, I have to write my essays for the Covenant & Conversation series many weeks in advance. I had come to Matot-Masei, and had decided to write about the cities of refuge, but I wasn’t sure which aspect to focus on. Suddenly, overwhelmingly, I felt an instinct to write about one very unusual law.

The cities were set aside for the protection of those found guilty of manslaughter, that is, of killing someone accidentally without malice aforethought. Because of the then universal practice of blood vengeance, that protection was necessary.

The purpose of the cities was to make sure that someone judged innocent of murder was safe from being killed. As Shoftim puts it: “And he shall flee to one of these cities and live” (Deut. 19:5). This apparently simple concept was given a remarkable interpretation by the Talmud:

The Sages taught: If a student was exiled, his teacher was exiled with him, as it is said: “(And he shall flee to one of these cities) and live,” meaning do the things for him that will enable him to live.[1]

As Rambam explains: “Life without study is like death for scholars who seek wisdom.”[2] In Judaism, study is life itself, and study without a teacher is impossible. Teachers give us more than knowledge; they give us life. Note that this is not an aggadic passage, a moralising text not meant to be taken literally. It is a halachic ruling, codified as such. Teachers are like parents only more so. Parents give us physical life; teachers give us spiritual life.[3] Physical life is mortal, transient. Spiritual life is eternal. Therefore, we owe our teacher our life in its deepest sense.

I had just written the text above when the phone went. It was my brother in Jerusalem to tell me that my teacher, Rabbi Nachum Eliezer Rabinovitch, zecher tzaddik livracha, had just died. Only rarely in this “world of concealment”[4] do we feel the touch of Providence, but this was unmistakable. For me, and I suspect everyone who had the privilege of studying with him, he was the greatest teacher of our generation. 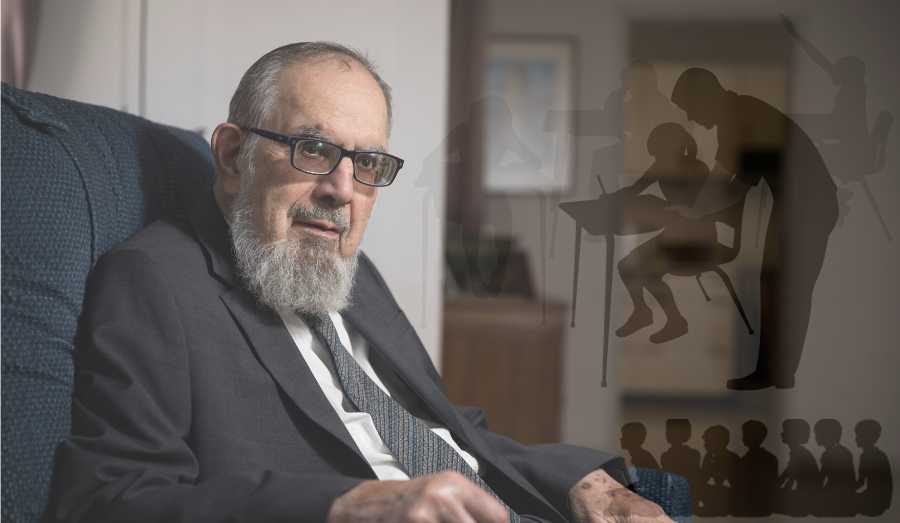 He was a master posek, as those who have read his Responsa will know. He knew the entire rabbinic literature, Bavli, Yerushalmi, Midrash Halachah and Aggadah, biblical commentaries, philosophy, codes and responsa. His creativity, halachic and aggadic, knew no bounds. He was a master of almost every secular discipline, especially the sciences. He had been a Professor of Mathematics at the University of Toronto and had written a book about probability and statistical inference. His supreme passion was the Rambam in all his guises, particularly the Mishneh Torah, to which he devoted some fifty years of his life to writing the multi-volume commentary Yad Peshutah.

By the time I came to study with the Rav, I had already studied at Cambridge and Oxford with some of the greatest intellects of the time, among them Sir Roger Scruton and Sir Bernard Williams. Rabbi Rabinovitch was more demanding than either of them. Only when I became his student did I learn the true meaning of intellectual rigour, shetihyu amelim ba-Torah, “labouring” in the Torah.

To survive his scrutiny, you had to do three things: first to read everything ever written on the subject; second to analyse it with complete lucidity, searching for omek ha-peshat, the deep plain sense; and third, to think independently and critically. I remember writing an essay for him in which I quoted one of the most famous of nineteenth century Talmudic scholars. He read what I had written, then turned to me and said, “But you didn’t criticise what he wrote!” He thought that in this case the scholar had not given the correct interpretation, and I should have seen and said this. For him, intellectual honesty and independence of mind were inseparable from the quest for truth which is what Talmud Torah must always be.

Some of the most important lessons I learned from him were almost accidental. I remember on one occasion his car was being serviced, so I had the privilege of driving him home. It was a hot day, and at a busy junction in Hampstead, my car broke down and would not start up again. Unfazed, Rabbi Rabinovitch said to me, “Let’s use the time to learn Torah.” He then proceeded to give me a shiur on Rambam’s Hilchot Shemittah ve-Yovel. Around us, cars were hooting their horns. We were holding up traffic and a considerable queue had developed. The Rav remained completely calm, came to the end of his exposition, turned to me and said, “Now turn the key.” I turned the key, the car started, and we went on our way.

On another occasion, I told him about my problem getting to sleep. I had become an insomniac. He said to me, enthusiastically, “Could you teach me how to do that?” He quoted the Rambam who ruled that one acquires most of one’s wisdom at night, based on the Talmudic statement that the night was created for study.[5]

He and the late Rabbi Aharon Lichtenstein zt”l were two of the Gedolei ha-Dor, the leaders and role models of their generation. They were very different, one scientific, the other artistic, one direct, the other oblique, one bold, the other cautious, but they were giants, intellectually, morally and spiritually. Happy the generation that is blessed by people like these.

It is hard to convey what having a teacher like Rabbi Rabinovitch meant. He knew, for example, that I had to learn fast because I was coming to the rabbinate late, after a career in academic philosophy. What he did was very bold. He explained to me that the fastest and best way of learning anything is to teach it. So the day I entered Jews’ College as a student, I also entered it as a lecturer. How many people would have had that idea and taken that risk?

He also understood how lonely it could be if you lived by the principles of intellectual integrity and independence. Early on, he said to me, “Don’t be surprised if only six people in the world understand what you are trying to do.” When I asked him whether I should accept the position of Chief Rabbi, he said, in his laconic way: “Why not? After all, maybe you can teach some Torah.”

He himself, in his early thirties, had been offered the job of Chief Rabbi of Johannesburg, but turned it down on the grounds that he refused to live in an apartheid state. He told me how he was visited in Toronto by Rabbi Louis Rabinowitz who had held the Johannesburg position until then. Looking at the Rav’s modest home and thinking of his more palatial accommodation in South Africa, he said, “You turned down that for this?” But the Rav would never compromise his integrity and never cared for material things.

In the end, he found great happiness in the 37 years he served as head of Yeshivat Birkat Moshe in Maale Adumim. The yeshiva had been founded six years earlier by Rabbi Haim Sabato and Yitzhak Sheilat. It is said that when Rabbi Sabato heard the Rav give a shiur, he immediately asked him to become the Rosh Yeshiva. It is hard to describe the pride with which he spoke to me about his students, all of whom served in the Israel Defence Force. Likewise it is hard to describe the awe in which his students held him. Not everyone in the Jewish world knew his greatness, but everyone who studied with him did.

I believe that Judaism made an extraordinarily wise decision when it made teachers its heroes and lifelong education its passion. We don’t worship power or wealth. These things have their place, but not at the top of the hierarchy of values. Power forces us. Wealth induces us. But teachers develop us. They open us to the wisdom of the ages, helping us to see the world more clearly, think more deeply, argue more cogently and decide more wisely.

“Let the reverence for your teacher be like the reverence for Heaven,” said the Sages.[6] In other words: if you want to come close to Heaven, don’t search for kings, priests, saints or even prophets. They may be great, but a fine teacher helps you to become great, and that is a different thing altogether. I was blessed by having one of the greatest teachers of our generation. The best advice I can give anyone is: find a teacher, then make yourself a disciple.

[4] The phrase comes from the Zohar.

Around the Shabbat Table...

The Family Edition of Covenant & Conversation is an accompanying resource available to help parents and educators take Rabbi Sacks’ ideas from this essay and make them more accessible to teenagers. Each week, we will share three key questions from the Family Edition with you, to inspire discussion around your Shabbat table. For more educational content and discussion guides, please see the Family Edition here!

1) Why does the law force a person’s teacher to relocate to a city of refuge whenever their student moves there?

2) What do you think are the most important lessons Rabbi Sacks learned from Rabbi Rabinovitch?

3) Why does Judaism “make teachers its heroes and lifelong education its passion"?