The hidden meaning of the Bilam story

Many questions have rightly been asked about the story of Balak and Bilam and the would-be curses that turned into blessings. Was Bilam a true man of God, or was he a fraud, a magician, a sorcerer, a practitioner of dark arts? Did he have genuine powers? Was he really – as some of the Sages said – the equal of Moses?[1] Was he driven by the prospect of reward and honour from the Moabites and Midianites, or was he motivated by animosity toward the Israelites and their seeming closeness to God? Why did God first tell him not to go, then seemingly change His mind and tell him to go? What is the meaning of the episode of the talking donkey? Did it really happen, or was it, as Maimonides argued, a vision in Bilam’s mind?[2] 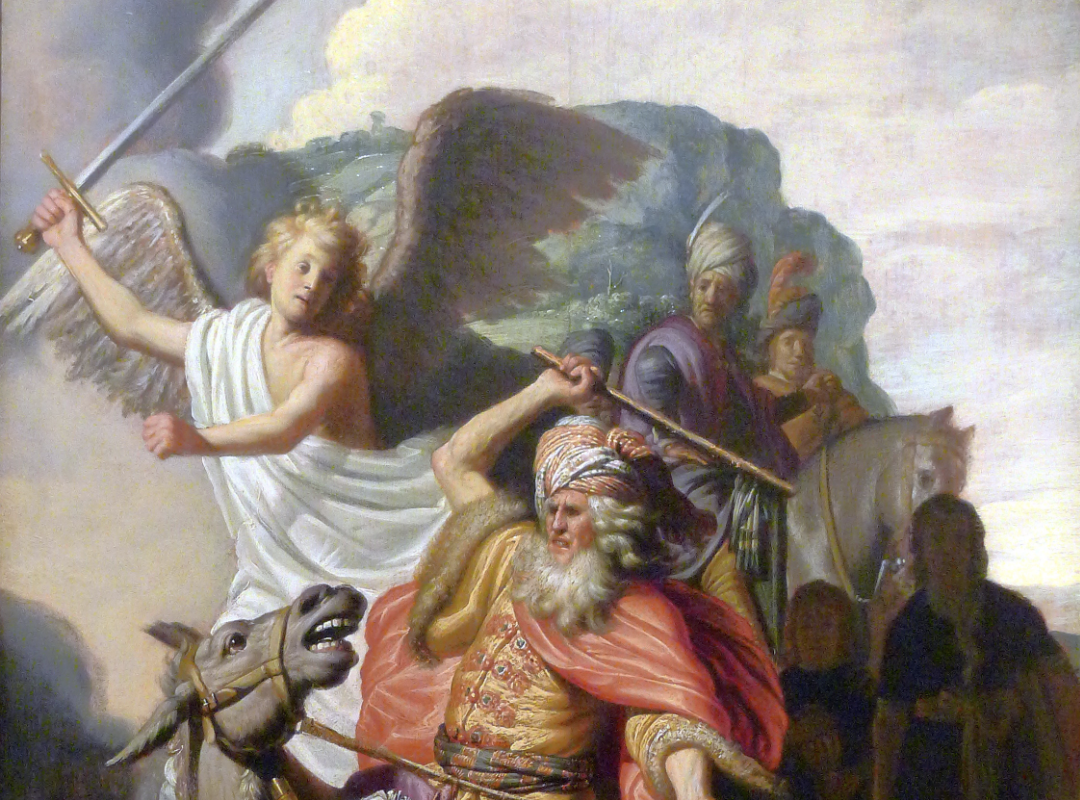 These are real questions, much debated. But there are more fundamental ones. What is the story doing here at all? The entire episode occurred away from the Israelites. No one from their side, not even Moses, was there to witness it. The only witnesses were Balak, Bilam, and some Moabite princes. Had the Israelites known the danger they were in, and how they were saved from it, it would have given them pause for thought before engaging in immorality and idol worship with the Moabite women, in the episode that follows on immediately from the story of Bilam. They would have known that the Moabites were not their friends.

Why did God put into Bilam’s mouth the extraordinary poetry that makes the blessings among the most lyrical passages in the Torah. All He really needed Bilam to say – and Bilam did eventually say it[3] – was the promise He gave to Abraham: “I will bless those who bless you, and whoever curses you I will curse” (Gen. 12:3).

Who was to be affected by this episode? What was the intended change it was meant to bring about? Who was its target audience? It did not affect the Moabites. They proceeded to get their women to successfully entice the Israelite men. A plague then struck the Israelites, taking 24,000 lives.

It did not affect the Midianites, whose hostility to Israel was such that God later told Moses: “Treat the Midianites as enemies and kill them” (Num. 25:17-18). Several chapters later God instructed Moses to take military vengeance against them (Numbers 31).

It did not affect Bilam himself. The Torah is very subtle about this. First, we read about the Moabite seduction of the Israelites and the deadly plague it caused. Then, six chapters later, we read that in the course of the war against the Midianites, Bilam was killed (31:8). Then, several verses later, “They were the ones who followed Bilam’s advice and enticed the Israelites to be unfaithful to the Lord in the Peor incident, so that a plague struck the Lord’s people” (Num. 31:16). In other words, having gone through what should surely have been a transformative experience of finding curses turned to blessings in his mouth, Bilam remained implacably opposed to the people he had blessed, and seemingly to the God who put the words into his mouth, and was still capable of devising a plot to injure the Israelites.

It did not change the Israelites, who remained vulnerable to the Moabites, Midianites, and the enticements of sex, food and foreign gods. It did not change Moses, who left it to Pinchas to take the decisive act that stopped the plague and was soon thereafter told that Joshua would succeed him as leader.

So, if it did not change the Moabites, Midianites, Israelites, Bilam or Moses, what was the point of the episode? What role did it play in the story of our people? For it does play a significant role. In Deuteronomy, Moses reminds the people that the Moabites “did not come to meet you with bread and water on your way when you came out of Egypt, and they hired Bilam son of Beor from Pethor in Aram Naharaim to pronounce a curse on you. However, the Lord your God would not listen to Bilam but turned the curse into a blessing for you, because the Lord your God loves you” (Deut. 23:4-5).

Joshua, when he came to renew the covenant after the conquest of the land, gave an abridged summary of Jewish history, singling out this event for attention: “When Balak son of Zippor, the king of Moab, prepared to fight against Israel, he sent for Bilam son of Beor to put a curse on you. But I would not listen to Bilam, so he blessed you again and again, and I delivered you out of his hand.” (Josh. 24:9-10).

The prophet Micah, younger contemporary of Isaiah, said in the name of God, “My people, remember what Balak king of Moab plotted and what Bilam son of Beor answered,” just before he delivers his famous summary of the religious life: “He has shown you, O man, what is good and what the Lord requires of you: to act justly and to love mercy and to walk humbly with your God” (Mic. 6:5, 8).

At the culmination of the reforms instituted by Ezra and Nehemiah after the Babylonian exile, Nehemiah had the Torah read to the people, reminding them that an Ammonite or Moabite may not enter “the assembly of the Lord” because “they did not meet the Israelites with food and water but had hired Bilam to call a curse down on them. Our God, however, turned the curse into a blessing” (Neh. 13:2).

Why the resonance of an event that seemingly had no impact on any of the parties involved, made no difference to what happened thereafter and yet was deemed to be so important that it occupied a central place in the telling of Israel’s story by Moses, Joshua, Micah and Nehemiah?

The answer is fundamental. We search in vain for an explanation of why God should have made a covenant with a people who repeatedly proved to be ungrateful, disobedient and faithless. God Himself threatened twice to destroy the people, after the Golden Calf and the episode of the spies. Toward the end of our parsha, He sent a plague against them.

There were other religious peoples in the ancient world. The Torah calls Malkizedek, Abraham’s contemporary, “a priest of God most high.” (Gen. 14:18). Yitro, Moses’ father-in-law, was a Midianite priest who gave his son-in-law sound advice as to how to lead. In the book of Jonah, during the storm, while Jonah the Hebrew Prophet was sleeping, the Gentile sailors were praying. When the Prophet arrived at Nineveh and delivered his warning, immediately the people repented, something that happened rarely in Judah/Israel. Malachi, last of the Prophets, says:

Why then choose Israel? The answer is love. Virtually all the Prophets said so. God loves Israel. He loved Abraham. He loves Abraham’s children. He is often exasperated by their conduct, but He cannot relinquish that love. He explains this to the prophet Hosea. Go and marry a woman who is unfaithful, He says. She will break your heart, but you will still love her, and take her back (Hos. 1-3).

Where, though, in the Torah does God express this love? In the blessings of Bilam. That is where He gives voice to His feelings for this people. “I see them from the mountain tops, gaze on them from the heights: This is a people that dwells apart, not reckoned among the nations.” “Lo, a people that rises like a lion, leaps up like the king of beasts.” “How good are your tents, O Jacob, Your dwellings, O Israel!” These famous words are not Bilam’s. They are God’s – the most eloquent expression of His love for this small, otherwise undistinguished people.

Bilam, the pagan prophet, is the most unlikely vehicle for God’s blessings.[4] But that is God’s way. He chose an aged, infertile couple to be the grandparents of the Jewish people. He chose a man who couldn’t speak to be the mouthpiece of his word. He chose Bilam, who hated Israel, to be the messenger of His love. Moses says explicitly: “The Lord your God would not listen to Bilam but turned the curse into a blessing for you, because the Lordyour God loves you.”

That is what the story is about: not Balak, or Bilam, or Moab, or Midian, or what happened next. It is about God’s love for a people, their strength, resilience, their willingness to be different, their family life (tents, dwelling places), and their ability to outlive empires.

The Rambam explains that all God’s acts have a moral message for us.[5] I believe that God is teaching us that love can turn curses into blessings. It is the only force capable of defeating hate. Love heals the wounds of the world.

[2] Guide for the Perplexed, II:42. For Nahmanides’ critical view on Maimonides’ approach, see his Commentary to Gen. 18:1.

[4] However, Devarim Rabbah 1:4 suggests that God chose Bilam to bless the Israelites because when an enemy blesses you, it cannot be dismissed as mere partiality.

Around the Shabbat Table...

The Family Edition of Covenant & Conversation is an accompanying resource available to help parents and educators take Rabbi Sacks’ ideas from this essay and make them more accessible to teenagers. Each week, we will share three key questions from the Family Edition with you, to inspire discussion around your Shabbat table. For more educational content and discussion guides, please see the Family Edition here!

1) What is distinct and unique about the story of Bilam and Balak compared to other stories in the Torah?

2) How can a story about God's love for Israel help us (both Jews and non-Jews) to live our lives?

3) With the current unrest in America and around the world, how does the message “only love can defeat hate” help?