"We all pray you should have nothing to do."

In a rare audience with one of the greatest luminaries of the Jewish world, Israel Dog Unit (IDU) director Yekutiel Ben-Yaakov today received the blessing of R. Chaim Kanievsky for the organization’s many life-saving endeavors throughout Israel. Particular note was made of the IDU’s work finding missing persons and the recently-developed pilot project to develop service dogs to detect individuals with COVID-19.

R. Kanievsky listened with great excitement before giving his wholehearted blessing to the IDU’s non-profit, lifesaving efforts, as well as the tongue in cheek prayer that “We all pray that you will have nothing to do.”

This powerful blessing came to the IDU at a most auspicious time, as the search for Ohr Buskila is still fully underway; the IDU has spent more than a week leading teams of local volunteers, border guards, police officers, and other non-profit organizations into the woods around Zichron Yaakov in an attempt to bring Ohr home. 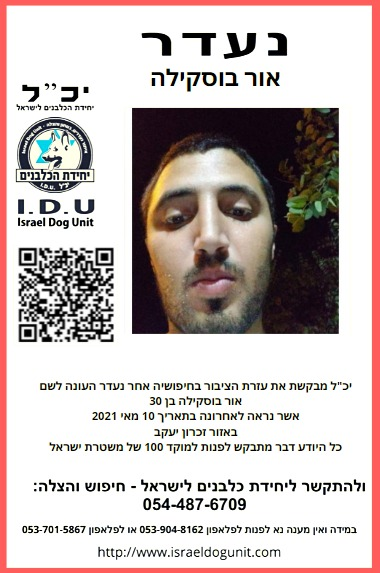 Another notable name that has lent its support to the effort recently was Lt. Cnl. (Res) Yaron Sitbon, former commander of the IDF’s Special Airborne Operations school (responsible for training, among many other elite units, the IDF’s canine unit Oketz), who came to Zichron Yaakov to lend his considerable expertise to the effort.

Due to the grave concerns for the missing person’s health raised by the length of time that had elapsed since his disappearance, IDU director Yekutiel Ben-Yaakov held a brainstorming session with Sitbon and Or’s relatives to determine further areas to be searched and steps to be taken. A significant number of volunteers were deployed throughout the area in the hopes of finding evidence to better direct the search efforts.

Ben-Yaakov commented: “That such a senior officer, with such rich experience in the field of canine operations and locating missing persons would take the time to volunteer his help is not taken for granted. Our gratitude and that of Or’s gravely worried family is given to him from the bottom of our hearts. "