The blast in Beirut poses an existential question: is Lebanon a failed state?

Beirut was already a powder keg, but this bolt from the blue has highlighted the fact that Lebanon is unable to protect its citizens. Op-ed.

The calamity that befell Beirut on Tuesday was almost biblical in suddenness and scale. Two explosions, the second loud enough to be heard hundreds of miles away, devastated one of the greatest ports in the Levant. The toxic mushroom cloud that followed will have added an additional hazard to the thousands of injuries. At least four hospitals were severely damaged; the others lost electricity.

Poor Lebanon: a divided country, still recovering from civil war and in the throes of a seemingly endless economic malaise, has now been laid low by a catastrophe that could bring chaos in its wake.

The responsibility for allowing huge quantities of this notoriously combustible chemical to be stored near the centre of the capital for several years lies squarely with the Lebanese government.

The initial reaction of the authorities was unpromising. Hospitals were reported to be overwhelmed and the power cuts that afflict Beirut at the best of times may now cost lives. President Michel Aoun threatened severe punishments against those found to be guilty, but he offered no apology or explanation for the presence of a warehouse full of ammonium nitrate — traditionally known as saltpetre, the main ingredient of gunpowder.

The responsibility for allowing huge quantities of this notoriously combustible chemical to be stored near the centre of the capital for several years lies squarely with the Lebanese government.

The most likely explanation is official corruption, which is endemic in this dysfunctional state. Few capitals have a greater gap between rich and poor than Beirut: the former are above the law and the latter at their mercy. The assassination of Prime Minister Hariri in 2005, which took place near the epicentre of Tuesday’s blast, has never been satisfactorily solved, though verdicts on four accused are due this Friday.

Foul play in this case, too, cannot yet be ruled out: President Trump claims that his generals told him that “some kind of bomb” must have been involved. We may not know for some time, because the blast is likely to have vapourised any evidence at the scene.

The deeper, more urgent question for the people of Lebanon is: how much longer can they tolerate the presence of up to 50,000 heavily armed Hezbollah fighters in their midst? Proscribed by the US and the UK as a terrorist organisation, Hezbollah likes to present itself as “the resistance” to potential Israeli aggression. Over the past 35 years, however, it has grown into a state within a state. Though its leader Hassan Nasrallah boasts of the movement’s welfare and religious roles as well as its military functions, all three are largely financed and controlled by a foreign power: Iran.

For the Supreme Leader Ali Khamenei and his satrap Nasrallah, Lebanese lives are expendable. Why else would Hezbollah station as many as 100,000 missiles in and around the population centres of Beirut? The fact that the government dares not force them to disarm demonstrates its weakness on a daily basis.

The world now knows that Beirut was literally a powder keg. But the even greater disaster that is waiting to happen there concerns the use of more than two million civilians as human shields by Hezbollah.

The world cannot stand by while Lebanon deals with the aftermath. The loss of its main port means that the country will quickly run short of food and other essentials. Britain can and should offer to airlift medical supplies and aid via the RAF base in nearby Cyprus. The US and the EU will doubtless contribute to emergency relief.

Though it has no formal diplomatic relations with Lebanon, Israel has offered to treat victims at its world-class hospitals just a few miles across the border. It will be interesting to see whether the government of Prime Minister Hassan Diab accepts the Israeli offer — and whether other regional powers such as Turkey, Saudi Arabia and, above all, Iran are ready and willing to deliver not merely sympathy but real assistance.

This bolt from the blue has highlighted the fact that Lebanon is unable to protect its citizens. The conspiracy theories that invariably circulate in the Middle East after events of this kind will lay the blame everywhere except where it belongs: with the self-aggrandising leaders of Lebanon and the sinister interlopers of Iran. The blast in Beirut poses an existential question: is Lebanon a failed state?

MainAll NewsOpedsDickens defined Victorian England. Racist or not, we need to hear his voice

Dickens defined Victorian England. Racist or not, we need to hear his voice

Does every dead white male have to drown in the woke flood? Dickens actively fought for social justice and against slavery. Op-ed. If there is one figure in the whole of English literature who epitomises the writer with a social conscience, it is Charles Dickens. Yet according to a local Green activist in Kent, the novelist was a “genocidal racist” who deserves the pillory rather than the pantheon. Ian Driver, a former councillor in Thanet, was pictured daubing graffiti on the Dickens House Museum in Broadstairs — the building on which the home of the much-loved character of Betsey Trotwood was modelled in David Copperfield.

Mr Driver, who openly admits his act of vandalism, has yet to be charged by the police, but is in any case unrepentant. He told the Times: “I don’t think [Dickens’s] opposition to slavery wipes the slate clean. He was an evil racist character.” 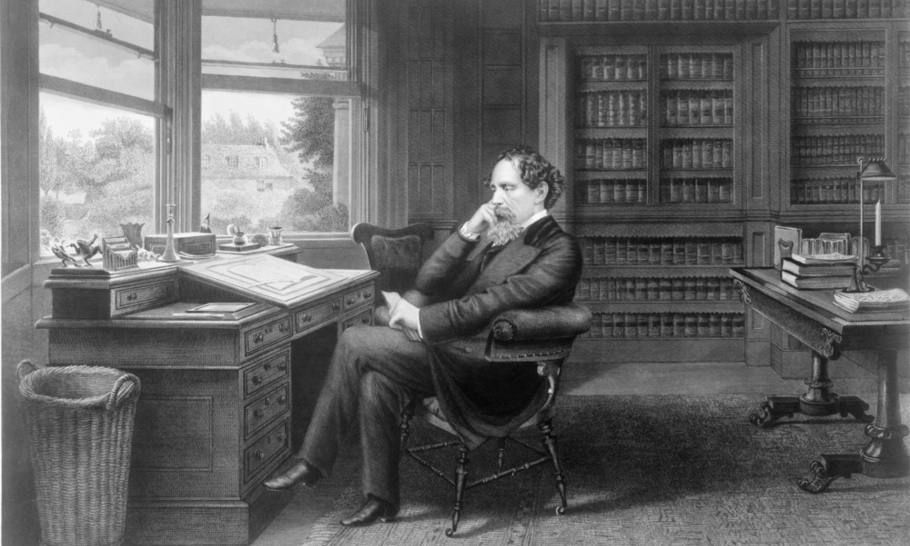 Evidently the tidal wave of disapproval that has overwhelmed dead white male celebrities of every kind in recent times is now flooding into the Dickensian landscapes that are etched into our collective memory. If the likes of Mr Driver have their way, perhaps the most eminent Victorian of them all — the man to whom the world owes much of the mental furniture that the word “Victorian” implies — will be excised from the

More than any writer before or since, Dickens humanised those who had been deprived of their humanity.

record, his stories banished from our libraries and our screens.

The truth is that Dickens did not merely oppose slavery: he actively campaigned against this “accursed and detestable system”, at some cost to his own book sales. He toured the antebellum United States as the English-speaking world’s most celebrated living novelist. Appalled by what he saw in Virginia on his book tour, Dickens boycotted the rest of the slave states.

His first-hand observations of slavery found expression in the travelogue American Notes (1842) and the novel Martin Chuzzlewit. In the latter, Mr Tapley introduces the title character to Cicero, an elderly slave who has bought his own freedom and is saving up for “one small purchase — it’s nothing to speak of. Only his own daughter; that’s all!”

In his magazine Household Words, Dickens was full of praise for Uncle Tom’s Cabin, Harriet Beecher Stowe’s anti-slavery novel of 1852. He was confident that the opposition to slavery was growing in strength and would ultimately prevail, if only for economic reasons, supposing moral ones did not suffice. But he could not overcome his disillusionment with “the republic of my imagination”. In his eyes, Americans who participated or tolerated slavery were hypocrites, whether or not they admired his novels.

He was unimpressed even by the motives of the North in the Civil War. Yet the impact of a writer of such fame and prestige throwing his weight behind emancipation should not be underestimated. During his second tour of America in 1867-68, he was received as a hero, not least by President Andrew Johnson, and every public reading sold out. Though he did not live to depict the era of Reconstruction in his fiction, he was sympathetic to the challenges that Americans faced in the aftermath of their terrible conflict.

It is true that Dickens was by no means insulated from the attitudes and prejudices of his day. His essay on The Noble Savage uses language about other races that strikes us today as condescending. His depiction of Fagin in Oliver Twist was implicitly anti-Semitic, as he himself acknowledged and for which he later sought to atone. His battles were primarily about class rather than race. But in public, at least, he eschewed the expressions of racism in which some of his literary contemporaries, such as Thomas Carlyle, indulged.

In private it was another matter. His notorious comments in a letter to Lady Burdett-Coutts about Indians (in India) during the rebellion (or Mutiny) in 1857, where he fantasised about “doing my utmost to exterminate the Race upon whom the stain of the late cruelties rested”, seem to have prompted Mr Driver’s decision to daub the words “DICKENS RACIST” on the Broadstairs museum. These words, and the sentiments behind them, are vile. But Dickens was worried about the safety of his son, a teenage cadet then serving in India, and in the heat of the moment he was influenced by the lurid depiction in the press of atrocities committed during the uprising — images that drew on old racist stereotypes going back to the “Black Hole of Calcutta” a century earlier. Contextualising this letter does not excuse Dickens, but it goes some way to explaining an outburst that can only be seen as an aberration in his vast body of work.

In his private life, Dickens could be a monster, as the highly critical new biography by A.N. Wilson, The Mystery of Charles Dickens, amply demonstrates. But even Wilson concedes that this most heartless of husbands also deployed the redemptive power of his prose to redeem an entire nation — and, ultimately, humanity.

More than any writer before or since, Dickens humanised those who had been deprived of their humanity. For Dickens was above all a humanitarian, among the most influential the world has ever seen.

There can be no doubt about his commitment to justice: it shines through almost everything he wrote. His voice was heard from Moscow to Madras; it still resonates today. We must not allow that voice to be drowned out in the name of a misplaced sense of superiority, policed by moralising academics and self-appointed iconoclasts.

Dickens defined Victorian England. For better or for worse, he is part of our identity. He must not fall victim to identity politics.

Daniel Johnson is the founding Editor of TheArticle. For two decades he was a senior editor, editorial writer and columnist for The Times and the Daily Telegraph, before leaving to set up Standpoint magazine, which he edited for 10 years. He contributes regularly to Daily Mail, Wall Street Journal, Commentary, New Criterion, National Review and other papers, magazines and websites.@DANBJOHN| @DANBJOHNSON

TheArticle aims to be "a website which helps you make sense of the news through free access to exchanges of ideas, rather than echo chambers of prejudice. We have no ideological agenda and we promise never to tell you what to think. Our aim is simply to preserve the integrity of the free press in this country by embracing nuance and complexity – and showing the world in all its shades of grey. To read TheArticle is to see a story from every angle with no abuse, no extremism - and proper editing."