Israeli group keeps at-risk teens out of trouble through feeding the hungry. 'Thanks to SAHI, teens completely changed their lives around.'

With military precision, Dina Bracha and Sarah Workiya, both 17, dart up three flights of stairs in a dilapidated apartment building in this central Israeli city.

Quickly glancing around, Workiya places a bag of fresh fruits and vegetables on a doorstep while Dina delivers three loud knocks. As they have been trained, the girls then scamper down the staircase and disappear into the darkness — just as the elderly tenant opens the door to retrieve the groceries left for her.

Bracha, a Jerusalem native, and Workiya, originally from Ethiopia, both attend a boarding school for unsettled teens in Petach Tikvah, near Tel Aviv. They’re also among 850 or so members of SAHI, a nonprofit organization whose Hebrew acronym translates roughly into Special Hesed [Kindness] Unit.

The idea behind SAHI is simple: Enlist at-risk youth to help disadvantaged Israelis in a way that gets the teens excited and keeps them out of trouble.

With virtually the entire country under a mandatory lockdown due to the global COVID-19 pandemic, SAHI’s methods and mission — feeding Israel’s most economically vulnerable — has never been more important, organizers say. Already the city of Jerusalem has asked SAHI to assist 2,500 needy families.

“We are receiving thousands of calls from people asking for help,” said the nonprofit’s founder, Avraham Hayon. “We are now in emergency mode, operating in small units of three people each. This is only the beginning, and things will get harder for many people. So we’re working around the clock to raise funds, fill our warehouses and send more boxes to those in need.”

SAHI’s objectives were established long before the coronavirus reached Israel.

“Once I started, I just couldn’t stop,” Roy Lev, 18, said one evening in January as he pushed a shopping cart laden with donated carrots, cauliflower, apples and pita bread through the crowded Petach Tikvah produce market toward a waiting Mitsubishi minivan.

The charity took off in 2009, when Hayon, then an event planner, decided to volunteer for a good cause.

“My father was sick with cancer. I was told he had one year to live,” Hayon recalled. “I thought the only thing that would remain from my father after he died would be what he gave to the world.”

That led him to partner with his friend Oded Weiss on an innovative plan to help at-risk children. One hot summer night in July ’09, the two men went to Kiryat Gat, started a bonfire, made coffee and waited for neighborhood youth to approach.

“Teenagers were bored, they saw the bonfire and came to check us out,” said Hayon, 42. “They asked us who we were. We told them: ‘We came to help poor families in this neighborhood, but we don’t know who they are. Maybe you can help us find the neediest ones, those who look in garbage cans at night for food.’ We made the kids curious. That’s how it started.”

A decade later SAHI, headquartered in Kiryat Malakhi, a small city about 30 miles south of Tel Aviv, has grown to 37 branches throughout Israel, from Hatzor HaGlilit in the north to economically challenged Ofakim in the south. 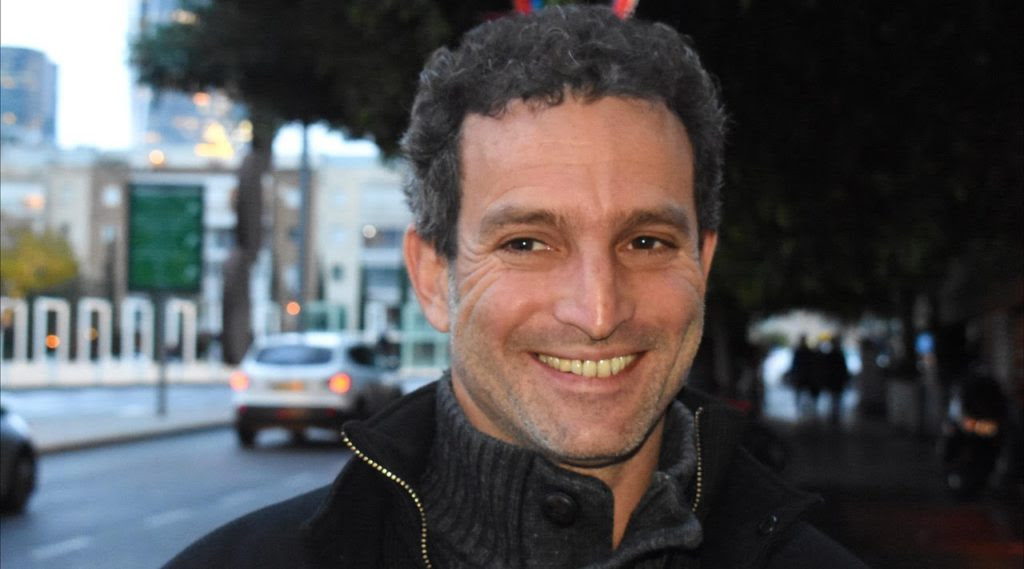 Avraham Hayom founded SAHI in 2009 after he was inspired to do good following his father’s cancer diagnosis. (Larry Luxner)

Until strict new social distancing laws that came into force in March, each group had been meeting two evenings per week — one night for food distribution and the other for group activities and confidence-building pep talks. The organization has nearly two dozen full-time employees and an annual budget of about $1.4 million.

“It’s a youth movement for youth who would never join a group. If they did, they’d be kicked out,” said Hayon, a former Israeli combat soldier who served in Lebanon. Before starting SAHI, he worked as a coffee shop owner, carpenter, DJ and music festival organizer. “We give them a positive outlet for their adrenaline.”

Under normal circumstances, SAHI volunteers distribute groceries to 1,200 Israeli families every week. Much of it comes from the Rami Levy supermarket chain, which contributes food on a monthly basis and permits the SAHI kids to stand outside and ask shoppers to donate extra items they’ve purchased.

SAHI is open to teens aged 13 to 18. Many have been involved in street fights, gangs, theft and vandalism. The youths hail from all sectors of Israeli society.

“With SAHI, these kids feel they belong to a special unit. In fact, one of our missions is to prepare them for the army, help them become successful adults and break the cycle of poverty,” Hayon said. “But the army usually won’t take them if they have a police record or didn’t finish school.”

Ishai Zigdon, 17, grew up on the streets of Amishav, a rough neighborhood of Petach Tikvah.

“I was a very problematic kid. At 11, I started drinking whisky and vodka. My friends were always talking about breaking into houses,” he said. “Then someone told me about SAHI. At first, I didn’t want to go, but he insisted, ‘It’s for you.’ I went, and it was the first time I felt myself accepted as I am, not as an alcoholic.”

Victoria Oreshko, 18, is studying veterinary medicine at a college here. Every Wednesday at 5 p.m., she meets local SAHI squad leader Reut Zohar and goes to the shuk — the open-air market — to solicit fruits and vegetables from vendors.

“I’m in charge of knowing what the families need and what to get from the market every week,” she said.

On a recent night, volunteers brought all the food back to Petach Tikvah’s Sportek Sirkin youth community center and assembled them into 35 individual care packages, each containing apples, oranges, grapefruits, pita, potatoes, onions, tomatoes and celery.

Deliveries began promptly at 10 p.m., with five or six adult volunteers driving the kids around to do the grocery drops. Each bag contains at least seven or eight items. 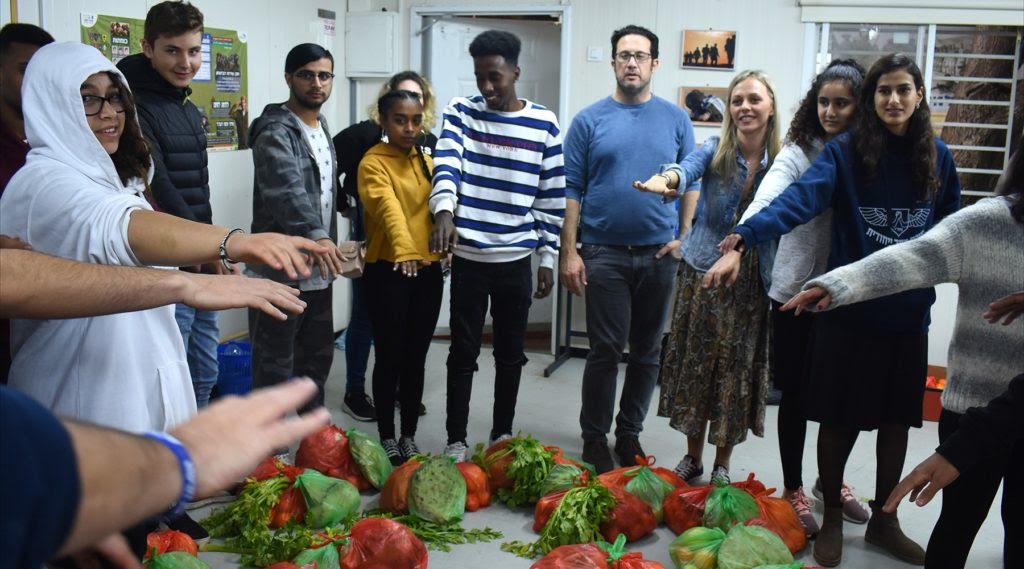 SAHI volunteers meet in Petach Tikvah, January 2020. They conclude their weekly gathering before heading out to distribute bags of donated groceries to needy families in the neighborhood. (Larry Luxner)

In areas where donations come directly from supermarkets or shoppers, the typical delivery consists of rice, oil, sugar, salt, canned food, and cornflakes. In poor neighborhoods adjacent to produce markets, it’s more likely to be fruits and vegetables.

Tel Aviv resident Oded Adler, 24, went to work as a staffer at the nonprofit after finishing his military service, traveling around Southeast Asia for more than a year and holding down a job he didn’t enjoy.

“Sitting in front of a computer for 10 hours a day wasn’t for me. I wanted to be with people face to face, outside in the field,” Adler said. “These kids are passionate about the idea of doing good for others.”

Hayon is part of the ROI Community, an international network sponsored by the Charles and Lynn Schusterman Family Foundation of some 1,600 Jewish activists, entrepreneurs, and innovators fostering positive social change around the world. He says he wants to replicate the SAHI model globally. The Jewish federation in Chicago already is using the model in a local neighborhood.

“Thanks to SAHI, thousands of teenagers have completely changed their lives around. Instead of getting into trouble, they’ve become good citizens of Israel,” he said. “On a deeper level, the values of what we teach — giving as a way of life — impact their lives and those who surround them wherever they go. They’ve taken those values into their army units, universities, neighborhoods, and homes.”

“Our hope is to scale it to the world. A few weeks ago, one of the teenagers came back very excited. He told me that just before knocking on someone’s door, he heard a child inside the apartment saying to his parents, ‘When will the angels bring us food again?’”